Proposal: To erect a new Terminal building and extend flying hours, with a view to increasing the number of flights in and out of the airport.

In my view, the proposal to build a new modern Terminal building is welcome, as is also the intention to develop the airport to accommodate the growth in the public’s demand for better and wider services.

However, there are several highly concerning issues raised with this proposal, which mean I cannot support it in its present form.

My primary concerns are with regard to air and noise pollution.

The public expects, indeed demands, the provision of air travel so they may go on holiday, visit relatives and friends, and attend to business. The question is how best to achieve this without adding greatly to the present levels of pollution?

With regard to air pollution, the newer aircraft issue fewer pollutants into the air than the older ones did and further research, which is being driven by the government, is ongoing to find new ways to reduce the carbon footprint still further towards zero. This won’t be easily and quickly achieved, but has to be our short-term goal for the immediate future.

As regards noise pollution, an increase in flights, which is expected to expand to accommodate an increase in passengers from 4m to 7m people, will only get worse, if the present flight plans are approved. Aircraft have a designated flight-path to follow when taking-off and landing, called the Noise Preferential Route (or NPR). This NPR has a margin of tolerance on either side, termed the ‘swathe’, to allow for flight fluctuations in exceptional circumstances.

The diagram shows the existing NPR alongside what we believe could be delivered as a suitable alternative that completely avoids Burley and Menston. 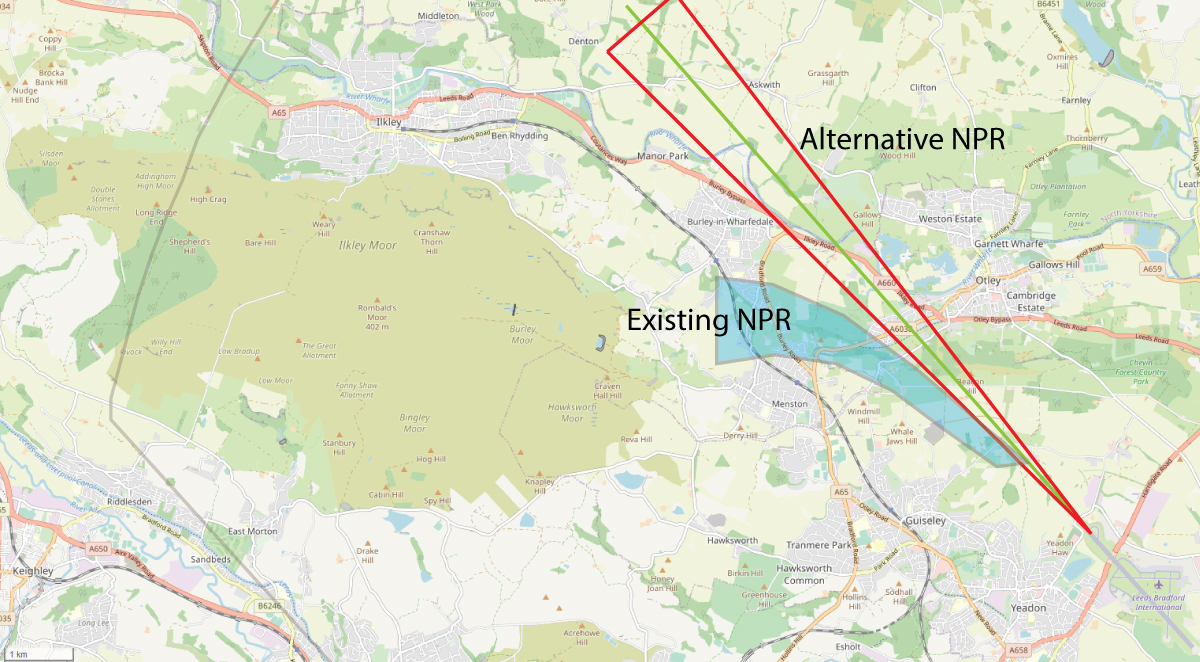 The NPR for the majority (80%) of flights taking-off from the airport is over the fields between the villages of Burley and Menston. However, according to residents under the ‘swathe’ (including myself), most flights rarely follow the NPR and fly within the ‘swathe’, which means over the top of residential housing. Actually following the NPR appears to be the exception!

This NPR was agreed in years gone by, as the obvious flight-path, which was straight down the Wharfe Valley following the river, had previously been claimed by the RAF as military airspace and was not available. That has now all changed, as the RAF have withdrawn from its use, and it is now available to the airport authorities to make application to use, which they are presently refusing to do! It is my belief that this alternative route would provide an elegant solution to one of the primary issues currently being experienced and which is of the greatest concern to residents.

Full details with regard to the issues involved and the potential solution, along with a survey poll, can be seen at: www.haveyoursayatlba.co.uk

However you may view this development, it is imperative that you make your views known by the closing date of Tuesday 16th June 2020 on the Leeds MDC website at: https://publicaccess.leeds.gov.uk/online-applications/ and then enter 20/02559/FU in the search box, which will take you to the application summary page where you can read other people’s comments and make your own.

Please note that there are a lot of entries in support of the airport’s proposals from people who do not live in our villages and only a few comments from residents. If you wish to see an improvement in air and noise pollution in our villages, this may be your one and only real chance. Please make your voice heard.

We use cookies on our website. If you continue to use this site we will assume that you are happy with it.OKRefuse CookiesCookies